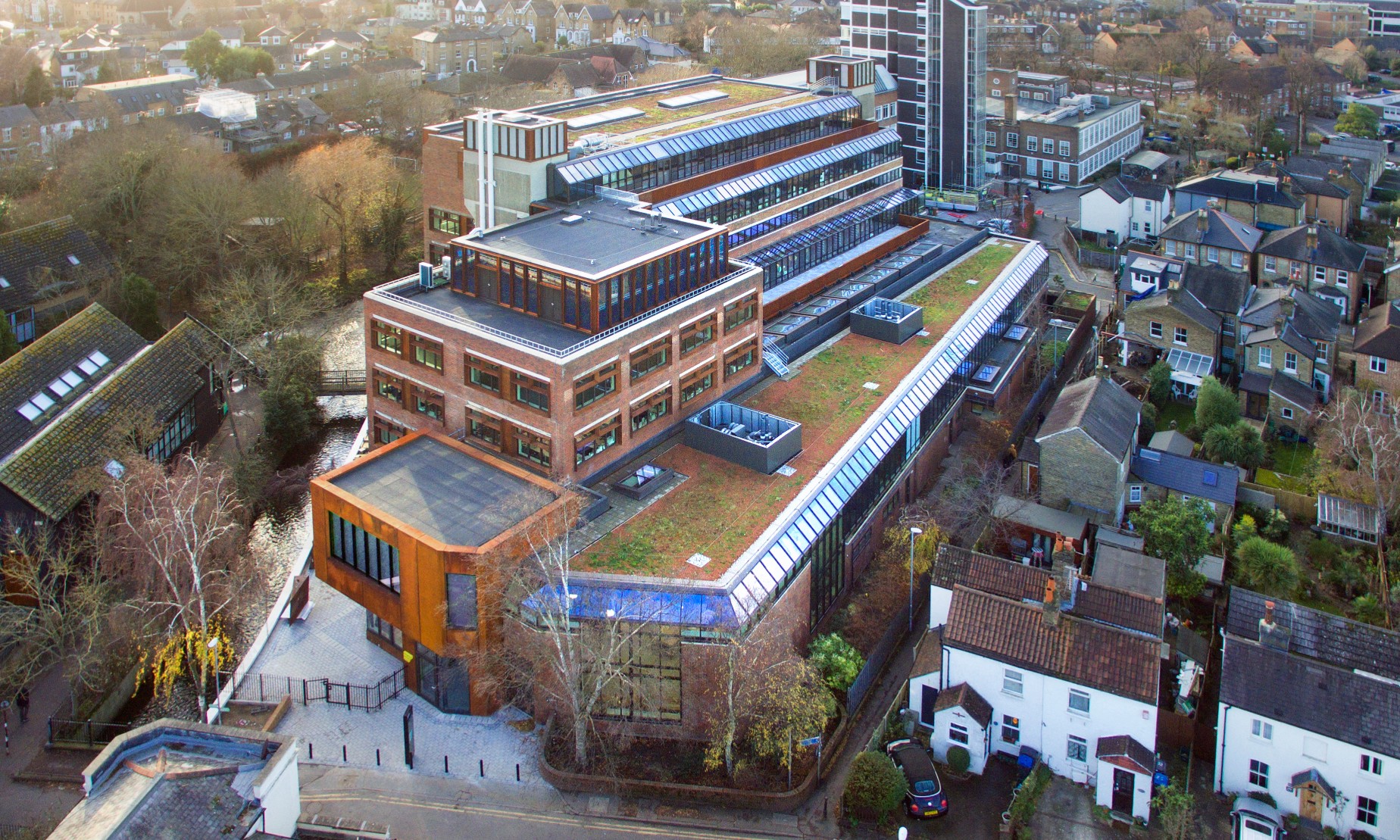 Haworth Tompkins has completed a comprehensive upgrade of Kingston University’s Knights Park campus, on the outskirts of London. The project involved developing a masterplan to guide the spatial reorganisation of the campus to suit the needs of the Kingston School of Art, including a development vision for expanding facilities and upgrading environmental performance.  The project also delivered several key elements of the masterplan, including a major redevelopment of the existing 1970s Mill Street Building and the internal refurbishment of the 1930s Quadrangle, which together provide 10,000sqm of creative space.

The Mill Street Building is the largest on campus, providing half of the total floor space and housing the open-access workshops used by students of all disciplines. The factory-like structure suffered from ad hoc modifications, leading to poor legibility and underutilised spaces. However, its raw brick, steel and concrete shell remained in good condition and has been cleaned and repaired. Retaining these elements helped to keep the equivalent of around 1.5 million kg of embodied CO2 ‘locked-up’, when compared with rebuilding.

Haworth Tompkins’ design approach embraces the robust, industrial elements of what was already there, whilst carving out more internal space, maximising natural light and offering greater flexibility and adaptability. A significant proportion of the redesign was devoted to a much-needed untangling and rethinking of how space is used within the school. Courses have been rejoined and grouped by mutual requirements leading to workshops and studio spaces being open for creative exploration and allowing students and staff to share ideas. Studio flexibility is supported by a core infrastructure of pinboard walls, exposed service grids, suspended power modules, data points, and pivoting walls, allowing the building to adapt to changing needs without wasteful replanning.

At the heart of the Mill Street Building are new state of the art workshop facilities for ceramics, photography, film production, woodwork, metalwork, plaster, printmaking, letterpress and digital hack, all of which support the School’s underlying ethos of Thinking Through Making.

Redundant plant spaces have been repurposed and the existing lift and stair cores have been extended, unlocking previously inaccessible spaces for use as design studios and improving the efficiency of the building. Sloped glazing has been introduced to previously blank areas of the north façade, providing quality light to north-facing studios and opening up views across the city.

Sculptural weathering steel window surrounds to the south support solar shading and provide a warm patina that complements the red and orange tones of the retained brickwork. Large expanses of previously underutilised flat roofs have been brought to life with green roofs and valuable outdoor amenity spaces for staff and students, while the riverfront has been enlivened an stone workshops and an outdoor gallery. The end result is a world-class learning facility on the banks of the Hogsmill River, providing the perfect space in which to experience practice-based learning within a series of expanded workshops, and highly adaptable studios.

Dan Tassell, associate director at Haworth Tompkins, comments: “Instead of major demolition we opted for a programme of adaptive re-use wherever possible, identifying and working with the best characteristics of the existing site, while replanning and retooling areas that required improvement.

This allowed us to deliver major upgrades to the functionality, legibility and environmental performance of the building, without losing the worn-in character that complements the creative functions housed within.”

Kingston School of Art was established at Knights Park in 1939 and is one of the UK’s leading art and design schools.

The project is on course to achieve BREEAM Outstanding and deliver a 52% reduction in CO2 emissions.